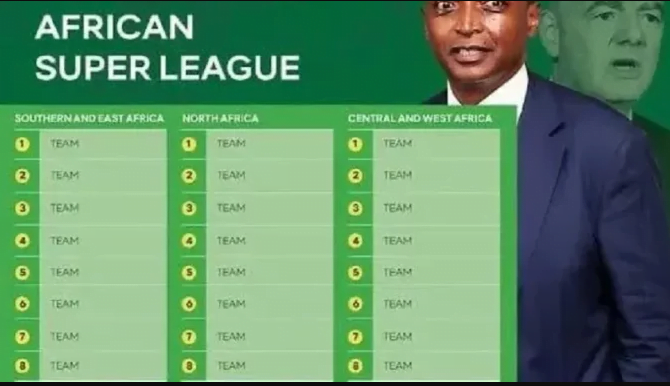 The Africa Super League will be an annual continental club football competition run by the CAF. was announced on 28 November 2019 by Gianni Infantino, President of FIFA. It will be launched 10th August in Tanzania, but it is known that it includes twenty-four of the elite African teams

Confederation of African Football (CAF) on Wednesday, at its 44th General Assembly, in Arusha, Tanzania launched the Africa Super League.

The new competition is aimed at improving the quality of club football in Africa both on and off the pitch.

Motsepe said: “The Africa Super League is one of the most exciting developments in the history of African football and the main objective is to make sure African club football is world class and competes with the best in the world.”

He adds that football is business and therefore emphasis will be put on income generation in the new competition.

“Football is about finance. It is about having a product and the commercial backing for it. The success of club football is based on commercial viability. The Africa Super League for us is the most important intervention to the development and advancement of football in Africa.”

The Africa Super League has faced criticism from different stakeholders many indicating it will only benefit traditional clubs.

Dr. Patrice Motsepe and gianni Infatino | Credit: CAF
With the European Super League failing at its birth, many have cast doubts about the same version in Africa but FIFA President Infantino was quick to distance the new competition from the failed attempt in Europe last year.

“Well, first of all, the Africa Super League is a completely different proposition than what was proposed in Europe, which was a kind of a breakaway thing outside of the structures,” Infantino said.

A look at the details of the new Africa Super League

24 Clubs from at least three regions (8 Clubs per region).
To be played for ten months, running between August and May.
197 matches with the finalists playing a maximum of 21 games.
To have promotion and relegation.
One grand finale at a neutral venue.
Cash prize of $100m per season with the winner earning $11.5m
Each of the participating club to earn about $2.5m to help in transport, accommodation, and buying players.

CAF Member Associations(54) will each get a $1m cash award per annum from the Super League kitty
CAF hoping to earn $50m to extend to youth and women’s football.
CAF will at a later date announce the finer details of the Africa Super League including matters concerning promotion and relegation.