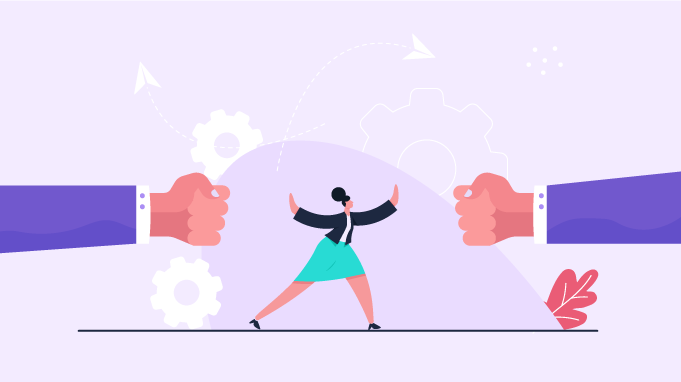 Simply refers to fight, battle, war an armed conflict, competitive or opposing action of incompatibles : antagonistic state or action (as of divergent ideas, interests, or persons) a conflict of principles.

Conflicts is inevitable in any company, conflicts is the part of company development, without conflict company growth will be very slow because conflicts brings new way of treating challenges in a company.

Are you always in the right? Are you sure? One of the main reasons for conflicts in the workplace is that both parties are unwilling to admit defeat on an issue.

Conflicts are common in many organizations, particularly in businesses with a competitive environment like sales, but they only remain unresolved when both parties concerned believe they have to ‘win’ something.

Still, conflicts aren’t always a bad thing; they can inspire creativity and innovation in a learning process when they’re dealt with properly.

The way you manage conflict is extremely important; handle it badly and things can quickly turn ugly. Avoiding dealing with a conflict is never a good thing; it breeds resentment and allows the conflict to build to the breaking point, by which time it’s probably too late to fix.

One of the hardest parts of resolving a conflict is taking the first step. You’ll need to arrange a meeting with the other person; if you turn up at their desk unannounced it may feel like an attack.

Consider the following points when you’re deciding how to deal with the problem:

You should always seek to resolve a conflict sooner rather than later, not just for your own sake; your whole team could suffer if there’s unnecessary tension in the office.

Before speaking to the other person, make a list of the points you want to discuss. Without preparing for a conversation you could end up ranting at them and make things worse. Have a conversation, not a confrontation.

Tell the other person why it’s important to you to resolve the conflict. Point out that spending your days in conflict with each other could be bad for productivity and the office atmosphere.

Don’t be tempted into thinking you have to prove the other person wrong, battling it out won’t get you anywhere, aim to compromise.

Never assume someone has done or said something out of spite; they might have a perfectly valid reason for their actions, which is why it’s important to clarify the situation.

Set a mutual goal, such as promising you will always hear the other person out, even if you disagree with what they say.

Keep in mind that you want to reach a solution to avoid the same thing happening in the future and that you can be assertive without being aggressive.

In some cases, when the conflict is out of hand and affecting your work, you might consider speaking to someone in your HR department.

HR may have their own methods and advice for how to resolve a conflict at work for your particular organization.

If you’re struggling with friction at work and haven’t managed to resolve it effectively, maybe it’s time to look for a new job? Get in touch with a specialist recruiter now.