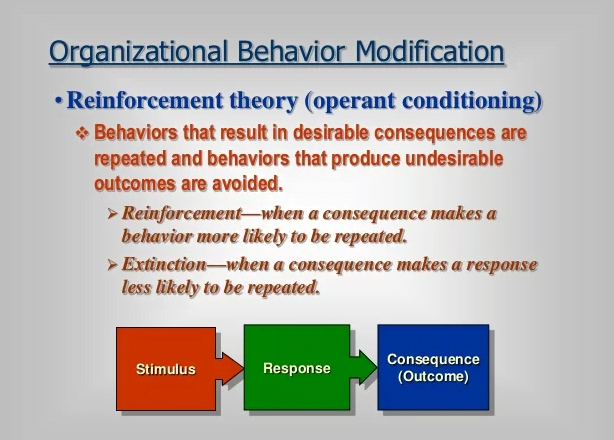 Organisational Behavior(OB) Modification : in simple words can be defined as a technique for modifying the modifying or behaviour of the organisational members so that they are engaged in desirable undesirable behaviour and. replacing it with behavior. It can be used for motivating the employees as well as for enhancing organizational effectiveness.

According to Stephen P. Robbins:

These steps are discussed as follows:

The first step in the OB Mod is identification of performance related behaviors. First of all the behavior should be identified as desirable or undesirable from the point of view of the organization. Then in the next stage, critical behaviors, that have significant impact on the employees’ performance, should be given due attention. The critical behaviors can be identified through discussions with the particular employee and his immediate superior as both are closely intimated with the job behaviors.

After the critical behaviors of the employees have been identified, the next step for the manager is to measure the frequency of the critical behavior over time. The measurement can be done by observation and by extraction of information from records. If the frequency is within the acceptable limit, it will require no action, but if it exceeds the acceptable limit, it will need immediate attention.

At the next step, the managers will have to do a functional analysis of the behavior that requires modification. This analysis will determine what circumstances lead to a particular type of behavior, what are the consequences of such behavior etc. Contingent consequences of behavior should be identified because these consequences have impact on subsequent behavior.

Once the critical behaviors have been identified and the circumstances which cause such behaviors have been determined, the next step will be to develop an effective intervention strategy. There are several strategies that can be used at this stage. These include positive or negative reinforcement, extinction or punishment.

Work-life balance is defined here as an individual’s ability to meet their work and family commitments, as well as other non-work responsibilities and activities. Work life balance, in addition to the relations between work and family functions, also involves other roles in other areas of life.

Greenhaus (2002) defined work –life balance as satisfaction and good functioning at work and at home with a minimum of role conflict.

Felstead et al. (2002) defines work-life balance as the relationship between the institutional and cultural times and spaces of work and non-work in societies where income is predominantly generated distributed through labor markets.

Work –life balance is not the allocation of time equally among work, family and personal demands. In literature, it is also emphasized that work-life balance is subjective phenomenon that changes from person to person. In this regard, work-life balance should be regarded as allocating the available resources like time, thought and labor wisely among the elements of life. While some adopt the philosophy of ‘working to live’ and sees work as the objective, others consider “living to work” and situated work into the Centre of life