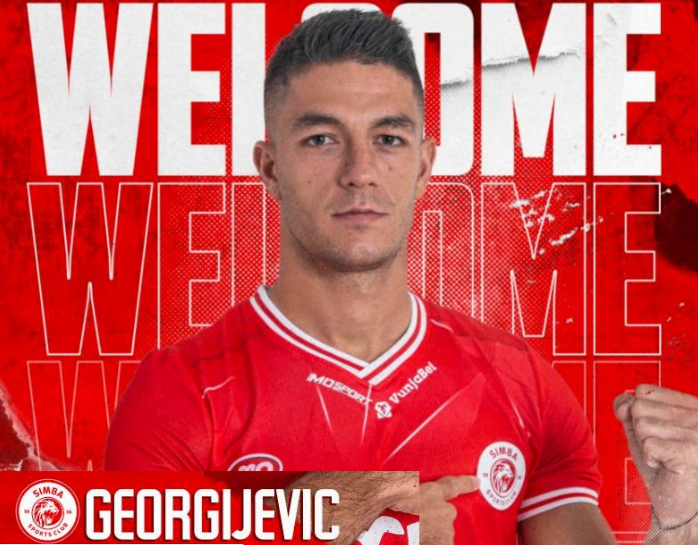 SIMBA CLUB after introducing a new star from Nigeria, Nelson Okwa, who yesterday joined his colleagues in training, the club’s bosses have surprised their fans by bringing the goal striker from Serbia, Dejan Georgijevic.

The striker, who was playing for the NK Domzale team in the Slovenian Premier League, was the one who was in the process of signing Msimbazi along with Okwa, who was signed from Rivers United of Nigeria.

Dejan, who has played for Bosnia & Herzegovina, Hungary, Serbia and Kazakhstan, is among the stars who will be introduced at the Simba Day festival that will be held on Monday.

Manzoki, who will be at Mkapa Stadium today with the Ugandan Vipers team to face Yanga at the Summit of the Citizen’s Week, will join Simba in a small window after his club insisted on letting him go despite having a two-month contract.

As a result of this situation, Simba’s bosses decided to sign the Serbian striker, whose records show that he is 28 years old and has won the Serbian League championship and participated in the European Champions League with his country’s Partizan Bergrade team, while he is famous for scoring and provide assistance. Despite playing as a striker, Dejan, who is the choice of Coach Zoran Maki who also brought in central defender Mohamed Ouattara, can also play as a right and left winger due to his ability to use both legs, famous for headers.

Although Simba’s bosses have been difficult to explain the deal, Mwanaspoti was leaked early since the team was in camp that Dejan will be the one who will close the team’s registration and may be handed jerseys between 7, 8 or 14 that were worn by Chris Mugalu, Rally Bwalya and Meddie Kagere who they’ve joined the club.

Bwalya was sold to South Africa, while Kagere and Mugalu were recently dropped by coach Zoran. Kagere has appeared in Singida Big Stars.

Records show that in the last 12 years the attacker has played in 12 teams, scoring a total of 52 goals in 226 matches in different leagues, he has also played for the Serbian youth teams of U19, U18 and U17 where he played 16 matches and scored eight goals.

The landing of the player makes Simba in the attacking area to have Pape Ousmane Sakho, Okwa, John Bocco, Clatous Chama, Kibu Denis and Peter Banda.