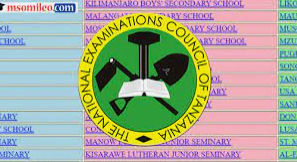 Tanzania Mainland withdrew from the East African Exams Council (EAEC) in April 1971 to run her own examinations, prompting the formation of NECTA.