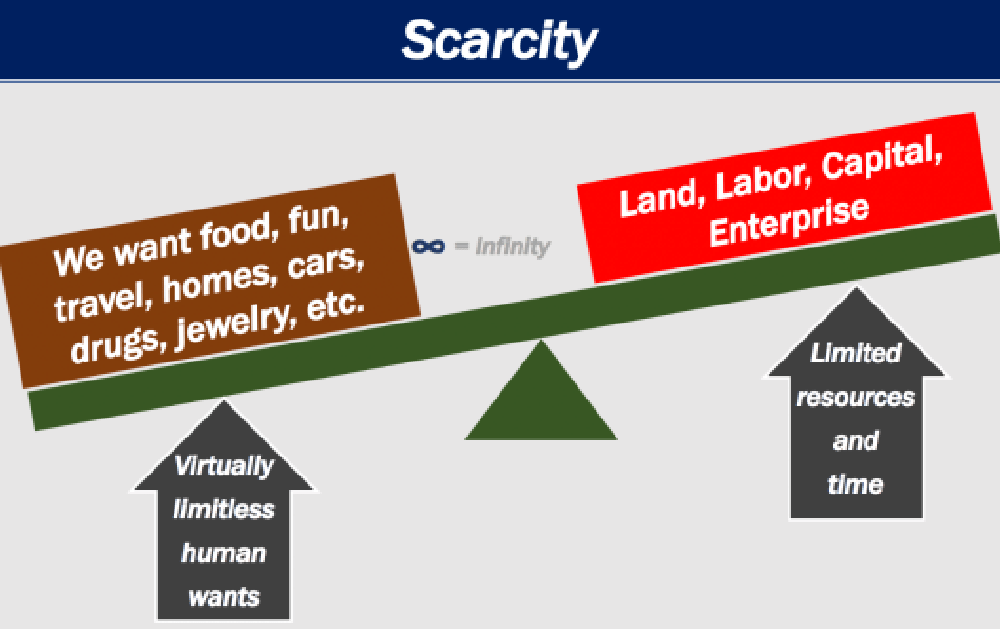 Among of the features of economics is scarcity, which deals with how people satisfy their unlimited wants and needs with their limited resources available. Scarcity affects the monetary value people place on goods and services and how governments and private firms decide to allocate available resources.
Scarcity is one of the key concepts of economics. It means that the demand for a good or service is greater than the availability of the good or service. Also, scarcity can limit the choices available to the consumers who ultimately make up the economy.

Scarcity is important for understanding how goods and services are valued. Things that are scarce, expensive minerals like gold, diamonds, or some kinds of knowledge, are more valuable for being scarce because producers of these goods and services can set higher prices as they wish. These producers know that because more people want their goods or services than the goods and services available in the society and they can find buyers at a higher cost.
Scarcity of goods and services is potential variable for economic system because it can affect the decisions made by consumers. For some people, the scarcity of a good or service means they cannot afford it. The economy of any place is made up of these choices by individuals and companies about what they can produce and afford to consume.

These resources can be workers, government and private company cooperative investments, or raw materials .Limits of scarcity can be balanced by taking resources from one area and using them somewhere else,example private companies or governments decide how the available resources are spread out. This is done by trying to strike a balance between what consumers need or want, what the government needs, and what will be an efficient use of resources to maximize profits to them.

Countries also import resources from other countries, and export resources from their own so as they can meet requirements processes. Due to it’s scarcity only few can posses or use available resources. Scarcity of resources can lead to the following threats to the society:
Economic growth is key to development and poverty reduction,Resource scarcity affects this in two ways: it increases the number of people in poverty, and it reduces the availability of inputs like water, energy, land that is needed for development. As we continue to face declining availability of critical natural resources, the challenge will be to balance the growing demand with economic progress and geopolitical stability.

Food insecurity, The recent escalation of food prices is due to many distinct factors, including income and population growth, higher energy and fertilizer prices, climate shocks, and an increased demand for bio fuels. Over the past few years, high prices for staple goods, including corn, rice, and wheat, have shifted expenditure patterns by large margins. Rapid increases in prices contribute to a sense of insecurity.
Disruptions in access to water and food will not only have economic effects but also profound

consequences for human health. The damage to crops from rising temperatures could cause food shortages among the world’s demography by the end of the time. Higher temperatures will cause more heat waves, as well as an increase in the transmission of infectious vector-borne diseases, both of which will raise mortality levels in developing countries.Example, Malaria, in particular, will become much more widespread, as a result of mosquitoes moving to higher latitudes as temperatures become warmer. It is possible that the increased transmission zones could result in greater number of people being infected with malaria.
Imbalances in energy supply, market speculation, price volatility, and high demand have contributed to high prices which inhibit access, creating an environment of energy insecurities. however, in the majority of the developing world, it is the lack of reliable and affordable energy that hinders economic growth. Energy access is hampered not only by high prices but also by poor distribution mechanisms and inadequate infrastructure.

Along with climatic disasters, intensification in resource scarcity could also lead to the rise of climate change across the developing world. Some have suggested that by after some times, people could be forced to migrate due to environmental factors.And some experts think such cross-border migration very likely, others predict that climate induced adjustment is more likely to cause migration within, and not between, borders. Internal displacement could put a serious strain on state response capacity, while cross border migration could increase interstate tensions.

Moreover,resource scarcity will continue to create significant challenges around the world, both in very immediate ways as people face shortages.The concept of sustainable resource management,that is sustainable because it is fair, economically sound, and environmentally viable needs to be customized and integrated into social systems. This should be part of a larger goal to build resilience into communities at all scales that are vulnerable to different modalities.