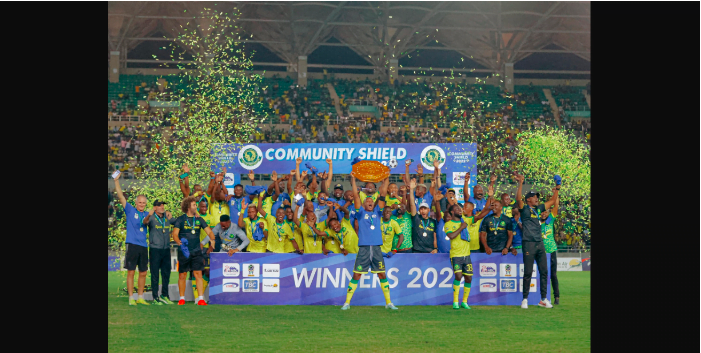 Historical Champions in Tanzanian Football, Yanga SC Club have successfully defended the title of the Community Shield in the 2022/2023 season after a 2-1 victory against their hometown team Simba SC in a game played at the Benjamin Mkapa tournament, Dar es Hello

All the goals of Yanga SC were scored by the striker, Fiston Mayele in the 49th and 80th minutes, after receiving a clear assist from Aziz Ki and managed to equalize the first goal for Yanga before the defender Dickson Job provided the assist for the second goal after analyzing the Simba SC fortress. and ended the game in just 90 minutes.

In that game, Yanga SC looked the best in the area of ​​Kiungobaji which was under Yannick Bangala and Khalid Aucho protecting the defenders, Kibwana shomari and Dickson Job.

Yanga SC has started the 2022-2023 competition season well after the victory where on August 16, 2022 they will open the curtain of the Premier Soccer League Tanzania Mainland against Police Tanzania FC at Sheikh Amri Abeid Stadium, Arusha while Simba SC will open the League against Geita Gold FC in the match at Mkapa Stadium, Dar es Salaam August 17, 2022.