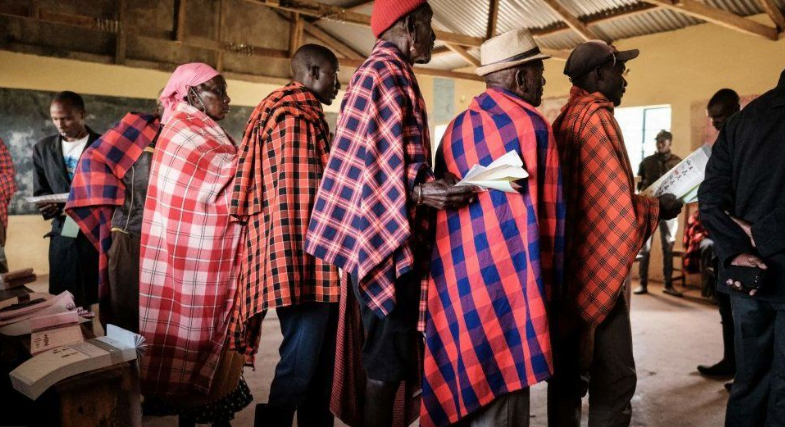 Polls are now officially closed but voting has been extended in places which opened late.

This vote follows an intense campaign dominated by debates about living costs, unemployment and corruption.

Kenyans were also electing a new parliament and local administrations.

The electoral commission is yet to announce the total turnout, but by 16:00 (13:00 GMT) – an hour before polls closed – just over 56% of the 22 million registered voters had cast their vote.

A top election official in Kenya’s central region of Nyeri told journalists that turnout has been low in that part of the country compared to 2017.

The counting of votes, which takes place at the polling stations, was expected to start soon after they closed with the collation of the presidential votes a priority.

Earlier, Mr Odinga was mobbed by supporters when he went to vote in Kibra – one of his strongholds in the capital, Nairobi.

He did not speak to the press, but his wife, Ida Odinga, said he was “upbeat about the election”.

When Mr Ruto voted in the town of Eldoret in the Rift Valley he pledged to accept the election result.

“I think for the first time in the history of multi-party democracy in Kenya, all the candidates have undertaken that they will accept the outcome of the results,” he told the BBC.

A dispute over election results in 2007 led to weeks of violence leading to the deaths of an estimated 1,200 people and forced about 600,000 people to flee from their homes

On Tuesday, there was some frustration among the early morning voters at a polling station in a primary school in the Westlands area of Nairobi.

They were blocked from entering the compound of the school for 90 minutes.

The reason for the delay was not clear and some people started chanting: “We want to vote!”

“I was here very early. It’s been disappointing that we got here early and had to wait for a long time,” voter Alex Kipchoge told the BBC.

When voting did get under way, however, the process went well.

“I was quite excited. I’ve been waiting for this for quite a long time and I’m happy that I’ve actually had the chance to vote,” first-time voter Abigail Awili said.

There were also delays in the coastal area of Mombasa and some parts of the north-east of the country. And in parts of Kakamega county, in the west, some electronic fingerprint scanning kits failed to work.

But the electoral commission said that nationwide only 200 broke down out of a total of more than 46,000.