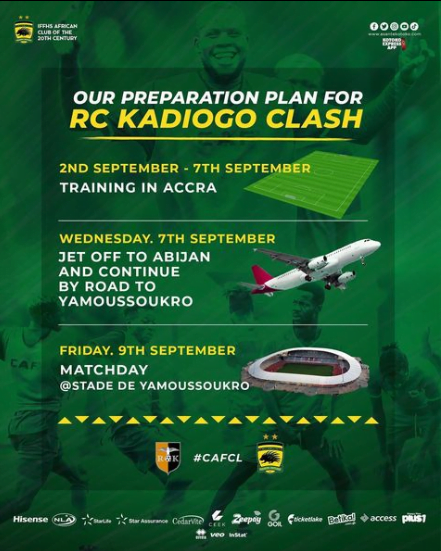 Asante Kotoko is the name of a professional football team that has been around since 1935. It is based in Kumasi, which is in the Ashanti Region of Ghana. They play in the Ghana Premier League and are known as the Porcupine Warriors. Their home games are at the Baba Yara Stadium in Amakom, Kumasi.

They have won the league a record 24 times and the CAF Champions League twice. The International Federation of Football History and Statistics named them the African club of the century (IFFHS).

Kumasi Asante Kotoko Sporting Club was started by 13 young Ashanti men. They were led by a young driver named Mr. Kwasi Kumah and helped by an electrician named L.Y. Asamoah.

Mr. Kwasi Kumah was from Nyankyerenease, which is near Kumasi in the Ashanti Region. He drove for Colonel Ross, an English military officer who was from the town of Nyankyerenease.

When Kwasi Kumah saw an exciting football game, he thought it would be a good idea to start a football team.
When Colonel Ross moved back to his hometown for good, Kumah bought a set of football jerseys to start a team.
In 1926, he started the Ashanti United Football Club with the help of his good friend L.Y.Asamoah.

After five years, the team changed its name to the Kumasi Titanics.
Most of the players worked for the government in places like prisons and railways and had to move from Kumasi. This made it hard for the team to win.
The name “Kumasi Titanics” didn’t bring them enough luck, so in 1934 they changed it to the more powerful name “Mighty Atoms.”

Still, the club didn’t make much progress, so in 1935, Mr. J.S.K. Frimpong, who was a teacher at the Kumasi Government School and had always been interested in the club, got some men from his school together and suggested changing the name from “Kumasi Titanics” to “Kumasi Asante Kotoko Football Club.”

They needed permission from the Asantehene, who is the King of the Kingdom of Ashanti, because the name “Kotoko,” which means “porcupine,” is the national symbol of the Ashanti people.
Nana Sir Osei Agyeman Prempeh II, the Asantehene, became the club’s first patron for life.
After that, the Kumasi Asante Kotoko Football Club was officially started in 1935.

Asante Kotoko‘s symbol is the “Porcupine,” which has a built-in set of sharp spikes to use when it is attacked.

Rail Club du Kadiogo is a Burkinabé football and basketball club based in Ouagadougou. They play their home games at the Stade de Kadiogo. The club plays in orange and black