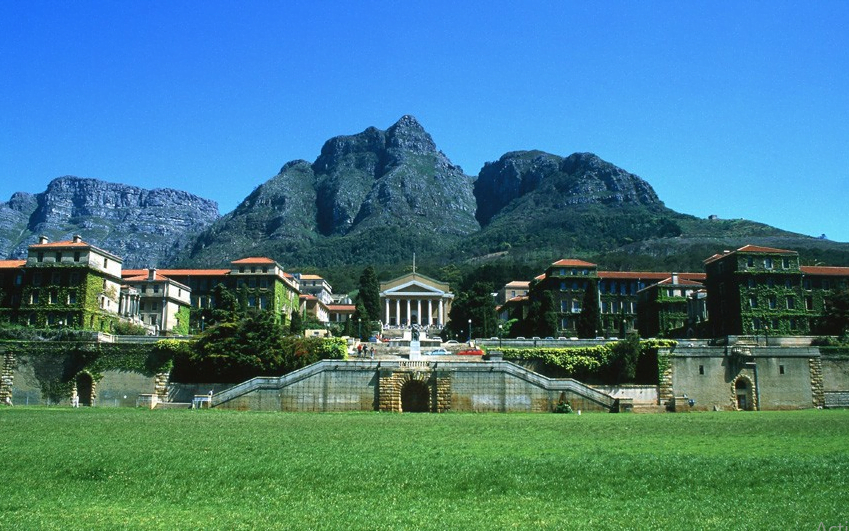 UCT is organised in 57 departments across six faculties offering bachelor’s (NQF 7) to doctoral degrees (NQF 10) solely in the English language. Home to 30 000 students, it encompasses six campuses in the Capetonian suburbs of Rondebosch, Hiddingh, Observatory, Mowbray, and the Waterfront.

Although UCT was founded by a private act of Parliament in 1918, the Statute of the University of Cape Town (issued in 2002 in terms of the Higher Education Act) sets out its structure and roles and places the Chancellor – currently, Dr Precious Moloi Motsepe – as the ceremonial figurehead and invests real leadership authority in the Vice Chancellor, currently Prof Mamokgethi Phakeng, who is accountable to the University Council.

A vibrant student community consisting of over 100 societies and clubs caters to diverse interests such as religion, politics, culture, community outreach and sport. UCT prominently appears in national leagues such as, but not limited to, the Varsity Cup. The historic academic, sporting, and political rivalry between UCT and Stellenbosch University brought about the nickname ‘Ikeys’, originally an anti-Semitic epithet for students of the university.

Five alumni, staff members, and researchers associated with UCT have won the Nobel Prize. As of March 2020, 35 UCT staff members are A-rated researchers according to the National Research Foundation of South Africa (almost 30% of the national total), which is the most prestigious ranking possible in the NRF rating classification scheme, a recognition of researchers who are unequivocally recognised by their peers as leading international scholars in their field for the high quality and impact of their recent research outputs. 88 staff members are part of the Academy of Sciences of South Africa.

Early history
The University of Cape Town was founded at a meeting in the Groote Kerk in 1829 as the South African College, a high school for young men. The college had a small tertiary-education facility, introduced in 1874 that grew substantially after 1880, when the discovery of gold and diamonds in the north – and the resulting demand for skills in mining – gave it the financial boost it needed to grow. The college developed into a fully fledged university during the period 1880 to 1900, thanks to increased funding from private sources and the government.

During these years, the college built its first dedicated science laboratories, and started the departments of mineralogy and geology to meet the need for skilled personnel in the country’s emerging diamond and gold-mining industries.

The UCT crest was designed in 1859 by Charles Davidson Bell, Surveyor-General of the Cape Colony at the time. Bell was an accomplished artist who also designed medals and the triangular Cape stamp. Another key development during this period was the admission of women.

In 1886 the Professor of Chemistry, Paul Daniel Hahn, convinced the council to admit four women into his chemistry class on a trial basis. Owing to the exceptional standard of work by the women students, the college decided to admit women students permanently in honour of Queen Victoria’s Diamond Jubilee in 1887.

The years 1902 to 1918 saw the establishment of the Medical School, the introduction of engineering courses and a Department of Education. UCT was formally established as a university in 1918, on the basis of the Alfred Beit bequest and additional substantial gifts from mining magnates Julius Wernher and Otto Beit.

The new university also attracted substantial support from well-wishers in the Cape Town area and, for the first time, a significant state grant.

View from the east of the Upper Campus at Groote Schuur on the slopes of Devil’s Peak; the university moved here in 1928.

In 1928, the university was able to move the bulk of its facilities to Groote Schuur on the slopes of Devil’s Peak, on land bequeathed to the nation by Cecil John Rhodes as the site for a national university. UCT celebrated its centenary the following year.

University of Cape Town Apartheid era
Apart from establishing itself as a leading research and teaching university in the decades that followed, UCT earned itself the nickname “Moscow on the Hill” during the period 1960 to 1990 for its sustained opposition to apartheid, particularly in higher education.

The university admitted its first small group of black students in the 1920s. The number of black students remained relatively low until the 1980s and 90s, when the institution, reading and welcoming the signs of change in the country, committed itself to a deliberate and planned process of internal transformation.

From the 1980s to the early 1990s, the number of black students admitted to the university rose by 35 percent. By 2004, nearly half of UCT’s 20,000 students were black and just under half of the student body was female. Today the university boasts having one of the most diverse campuses in South Africa.

Post-Apartheid era
Rhodes Must Fall (stylised as #RhodesMustFall) was a protest movement that began on 9 March 2015, originally directed against a statue at the University of Cape Town (UCT) that commemorates Cecil Rhodes. The campaign for the statue’s removal received global attention and led to a wider movement to “decolonise” education across South Africa.[14][15] On 9 April 2015, following a UCT Council vote the previous night, the statue was removed.

FeesMustFall was a student protest movement which was arguably indirectly inspired by the RhodesMustFall. It formally began at the University of the Witwatersrand and spread to UCT and Rhodes University and then the rest of the South African universities. It called for the abolition of tuition fee increases for the 2016 academic year.

Diverse demands arose such as the abolition of fees and decolonisation of higher education which led to substantial changes at South African public universities.

At UCT, the Senate began a widespread curriculum reform process and the university began the process of the renaming of buildings on campus (the most notable example was when Jameson Hall was renamed to Sarah Baartman Hall in 2019).

In September 2019, Film and Media studies student Uyinene Mrwetyana went missing. After the community and police began searching, her body was discovered in the Cape Flats area of Cape Town and Luyanda Botha was arrested and convicted for her rape and murder.

Her death and the rape and death of other women precipitated widespread public outcry that led to a campus shutdown and protests on campus, at the Parliament precinct in Cape Town CBD and at campuses around South Africa. Subsequently, President Ramaphosa announced reforms such as harsher punishments for sex offenders and the public disclosure of the National Register for Sex Offenders to stem sexual and physical violence against women and children.

Moreover, the Uyinene Mrwetyana Foundation was established and a special fund in her name was created to provide scholarships to female students in the Humanities Faculty.

In March 2020, UCT opened the Neuroscience Institute at the Groote Schuur Hospital in collaboration with the Western Cape Provincial Government, the first dedicated cross- and interdisciplinary centre for the study of and development of treatments for neurological and mental disorders in Africa.[23]

The main teaching campus, known as Upper Campus, is located on the Rhodes Estate on the slopes of Devil’s Peak. This campus contains, in a relatively compact site, the faculties of Science, Engineering, Commerce, and Humanities (except for the arts departments), as well as Smuts Hall and Fuller Hall residences.

Upper Campus is centered on Sarah Baartman Hall, the location for graduation and other ceremonial events, as well as many examinations. The original buildings and layout of Upper Campus were designed by JM Solomon and built between 1928 and 1930. Since that time, many more buildings have been added as the university has grown. Upper Campus is also home to the main library, The Chancellor Oppenheimer Library, which holds the majority of the university’s 1.3 million volume collection.

Contiguous with Upper Campus, but separated from it by university sports fields and the M3 expressway, are the Middle and Lower Campuses.

These campuses, which are spread through the suburbs of Rondebosch, Rosebank and Mowbray, contain the Law faculty, the South African College of Music, the School of Economics, most of the student residences, most of the university administrative offices, and various sporting facilities. The state of the art artificial grass soccer field has been approved by FIFA for training for World Cup teams.The Upper, Middle and Lower Campuses together are often referred to as the “main campus”.

The Faculty of Health Sciences is located on the Medical School campus next to the Groote Schuur Hospital in Observatory. The Fine Arts and Drama departments are located on the Hiddingh Campus in central Cape Town. The university’s original building, now known as the Egyptian Building, on the Hiddingh campus, was built in the Egyptian Revival style. The only other campus built in this style was the Medical College of Virginia in Richmond, Virginia in the United States. The UCT Graduate School of Business is located on the Breakwater Lodge Campus at the Victoria & Alfred Waterfront.

The Baxter Theatre Centre, located on the Lower Campus, is part of the University of Cape Town; it is also the second largest performing arts complex in Cape Town, after the Artscape Theatre Centre. It has three venues:

The 665-seat Main Theatre
the 638-seat Concert Hall, with a Von Beckerath organ
the 172-seat Golden Arrow Studio
For his contribution of the tract of land which the campus was founded on, a bronze statue of Cecil Rhodes was erected in 1934 on the Upper Campus, overlooking the university’s rugby fields. The statue was removed in April 2015 following pressure from student groups due to its representation of South Africa’s colonialist apartheid past and the university’s inadequate representation of black students, faculty, and staff.

The upper campus was affected by the Table Mountain fire in April 2021; the Jagger Library building, which housed rare books and documents including a large African Studies collection, was gutted.

Upper Campus seen from the rugby fields that separate it from Middle Campus, with Devil’s Peak in the background

The university has 19 student residences (or “rez” as known colloquially), offering both single-gender and mixed-gender housing. The Department of Student Housing oversees the residence system College House is the oldest university residence in Africa, being established in 1887.

UCT’s residence system is composed of three tiers. Students living in residence are placed in a tier according to the length of time that they have been in the residence system, studying in the university and service or part-time employment in a residence. As a student progresses through their academic journey they are moved into a higher tier. Postgraduate students are usually housed in the third-tier residences unless employed in lower-tier residences.